All You Need to Know About The Ethereum Merge and Transition to Ethereum 2.0 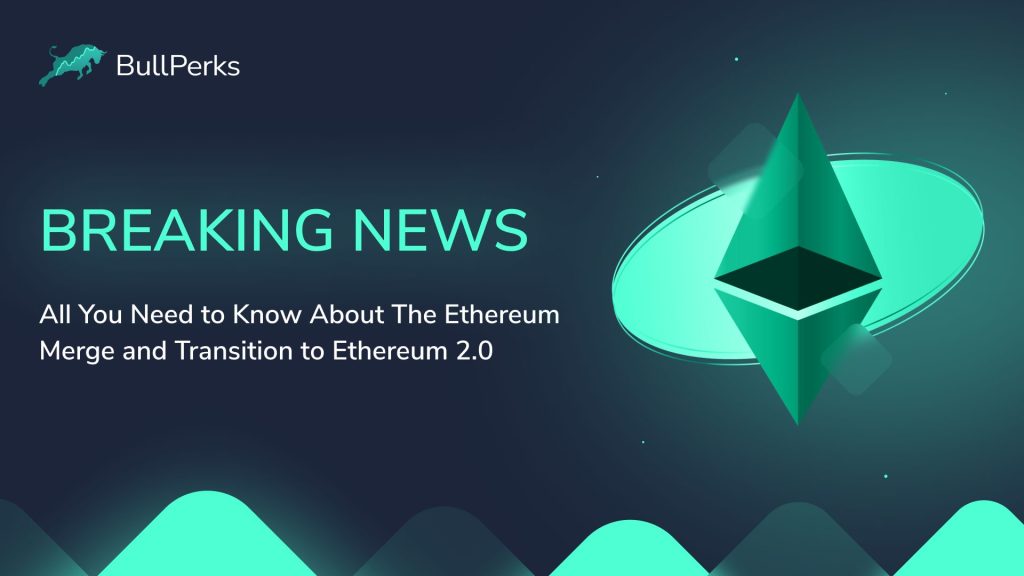 The Merge has become a hot topic among investors, traders, and crypto enthusiasts worldwide.

Perhaps the most anticipated event in the entire cryptocurrency industry in this crypto-challenging 2022 will be the Merge of the Ethereum mainnet with the Beacon Chain proof-of-stake system. BullPerks, the fairest and most community-dedicated decentralized VC and multichain launchpad, wants its community to know more about it, including when Ethereum 2.0 will come to life, why it matters, possible circumstances, and so much more.

“The Merge” will mark the fag end of the Proof-of-Work Ethereum that everyone knows today and will give birth to Ethereum 2.0, the cutting-edge version that will be based on the Proof-of-Stake consensus algorithm.

BullPerks has prepared answers to frequently asked questions about what everyone needs to know about Ethereum 2.0. Ready? So let’s get started.

What is the Merge?

“The Merge” is a term used to describe Ethereum’s transition from a proof-of-work consensus algorithm to one that uses proof-of-stake. In other words, it is merging Ethereum’s existing execution layer with its new Proof-of-Stake consensus layer, named the Beacon Chain.

The decision was made to take care of the energy-intensive mining process, as well as secure the network using Ether ($ETH). “The Merge” move is expected to provide greater security, resilience, and scalability to the entire Ethereum ($ETH) network. 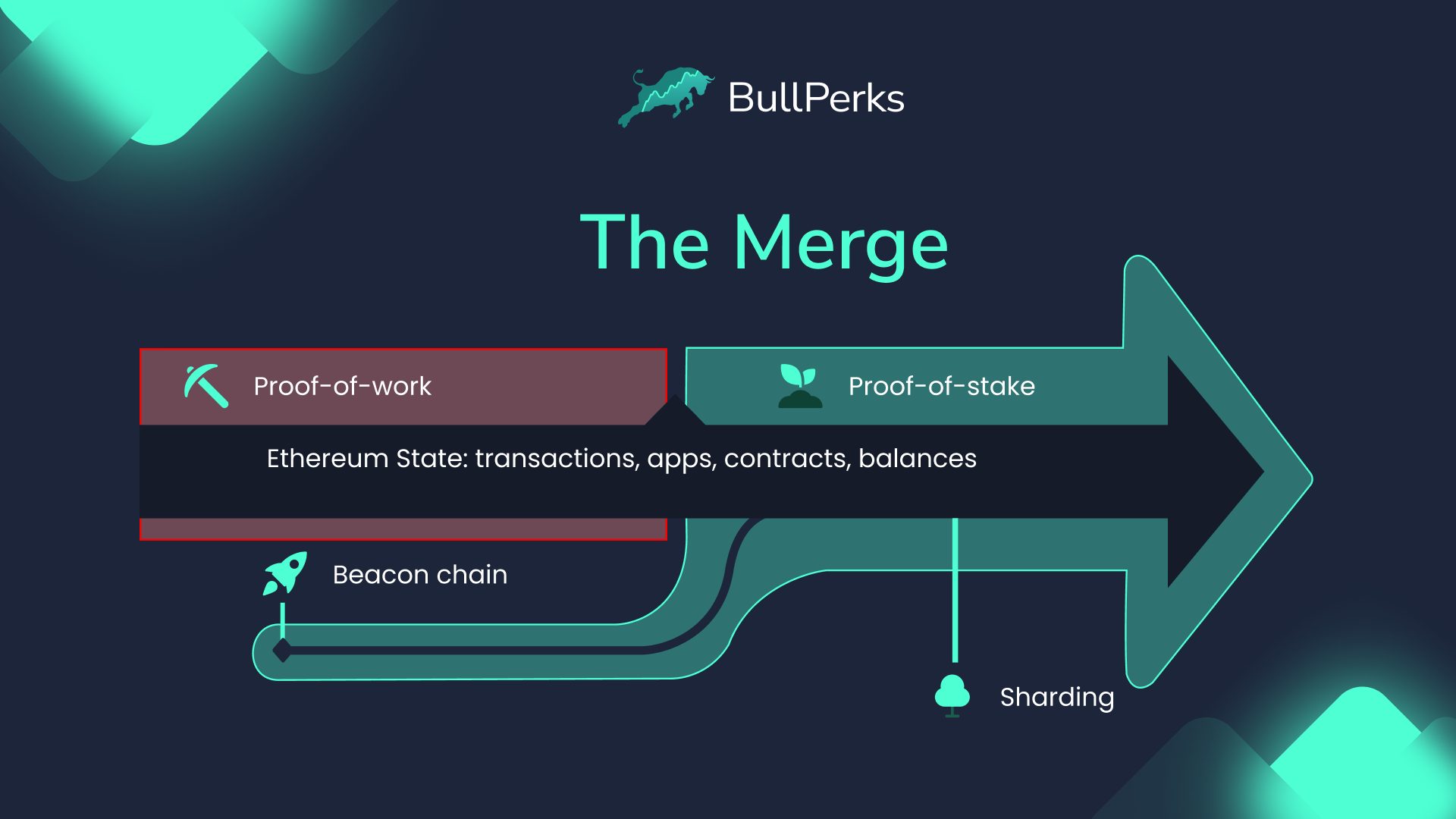 Why Does the Merge Matter?

The Beacon Chain is kind of the cornerstone of the entire Ethereum 2.0 architecture. It exists as a separate blockchain on the Ethereum network and runs in parallel without processing transactions on the main network. However, it has been reaching a consensus on its own.

The Merge represents the point when two systems (the current one and the proof of stake (PoS-powered) Beacon Chain) merge. This will replace the PoW consensus algorithm with the proof-of-stake one for good.

The Merge has several significant implications, including important points such as:

When Will the Merge Come to Life?

The Merge is currently scheduled for September 14, 2022. However, it is worth noting that Ethereum 2.0 was developed over several years of hard and fruitful work. Many Ethereum fans were confident that everything would happen in the future. However, various delays and complications can be expected.

Etherscan monitors mining difficulty to determine the exact date and time to get a better estimate of when The Merge will come to life.

One of the primary and most important promises of The Merge is scaling, and Ethereum’s founder with developers claimed that the network would be able to process about 100,000 transactions per second. However, it is only the first stage of five from the protocol’s incoming development that means the transition from Proof-of-Work (PoW) to Proof-of-Stake (PoS) following the merge of Ethereum’s current mainnet with the Beacon Chain. There are also four other steps, including:

How to Get Prepared for The Merge?

As one of the most significant events in crypto history, it was likely that scammers and fraudsters would try to make use of it and scam traders out of their funds. That’s why it is essential to know that Ether holders don’t need to do anything with their money and digital wallets before the Merge comes to life. All your funds, in case you hold them in a wallet, will still be accessible after The Merge, and you won’t need to do anything extra. However, if you’re not just a holder but a staking node operator and provider, smart contract or dApp developer, you need to be more cautious and take several actions.

Ahead of the final upgrade of the network, all node operators must update their software, something that blockchain developers have repeatedly warned about. Any operator that fails to do so will be stuck on a chain that is incompatible with the new version of the network and will not be able to work on the updated Ethereum version.

If you are working with staking nodes, you must authenticate both layers with a so-called shared JWT secret so that they can communicate securely. You should also set fee recipients’ addresses to receive the transaction fee tips you would receive.

If you are a non-validating node operator or a provider of infrastructure, you must install a consensus layer client aside from the execution layer client. Furthermore, you would need to authenticate two clients with a shared JWT secret so they can communicate secretly.

As for developers, they should look at Ethereum Foundation member Tim Beiko’s breakdown of How The Merge Impacts Ethereum’s Application Layer.

With that in mind, The Merge is definitely expected to be one of the most significant moments in the entire crypto history. Undoubtedly, it is considered one of the largest protocols that might undergo monumental change. However, even though Ethereum Classic has risen in price by 28% over the past day (6 September, 2022), everything is clearly not without complications. For example, due to the non-updated software of network participants supporting its work, the frequency of missed blocks has already increased by 1700%. Also, some experts believe that cryptocurrency mining, in general, will become less profitable for all assets. Therefore, it remains only to wait for what will happen next.

Disclaimer. This material should not be considered as a basis for making investment decisions or as a recommendation to participate in investment transactions. Trading digital assets may involve significant risks and can result in the loss of invested capital. Therefore, you must ensure that you fully understand the risk involved, consider your level of experience, investment objectives, and seek independent financial advice if necessary.